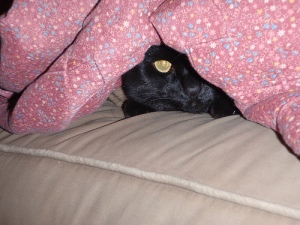 First I owe everyone apologies- I have been in a funk, and hiding under my covers reading – well we won’t discuss what exactly 🙂 Because of that I wasn’t answering comments the way I should and I don’t have an edited post for you today. But I have things to say- so welcome to the crazy world of my thoughts without Kilian to save me from myself!

When life gets overwhelming I pull out my Cozi to-do list and try and breathe and work through things one manageable task at a time. When this doesn’t work, I hide. I grab my computer and crawl under the covers and read. I do get work stuff done- things that other people will hold me accountable for, but things on my list- yeah not happening.

In-case you were wondering items on my to-do list don’t disappear while I hide. I am hopeful every time I do this, but nope they don’t move. However they do seem to organize, multiple and arm themselves. As of writing this I have yet to open my Cozi to-do list, as I will need to put on protective eyes gear and grab a shield first.

I have learned not to fight these down times, even though the getting back up might involve blood shed. When I fight, my self talk because really horrible and I hide from the world a lot longer than normal.

This time I had a work activity to bounce me back. I drove my five work kids (including a 2 year old) 6 hours North to ride the “Polar Express”- yep just like the book/movie. It was super fun! The kids were great, and I survived drive in rain and hail- I HATE driving in rain. It scares the crap out of me. When I’m home if it looks like it’s going to rain hard I don’t go out- not even for chocolate!

Once we got home- which was much later than I was planning due to the van doors being frozen shut, and having to stop because the kids wanted to use the bathroom and eat- so rude! I had a pout attack. I wanted to go to this Science Fiction/ Fantasy/ Horror writers conference, which I had won tickets too, but two of the panels I wanted to see were already over, and I wouldn’t get there until noon.

So I sat and pouted and checked my email trying to decide what to do. I was tired and bitchy, and hiding and reading was looking good. But then shocking came a piph (not a full epiphany just a piph) of anti-zen- I was waiting to WANT to go, I was waiting to FEEL like going, and that wasn’t wasn’t going to happen. I could stay home and read or I could go, but I would start either of them in a bad mood. So I sprayed on some perfume – you’re welcome- and I went.

I had a great time. Not sure I learned a lot, but I got to have fun, I have a few new plot/ character ideas germinating in my brain, and I got to talk to adults and writers.

One thing I would like to say to my fellow geeks, you CAN have social skills. Really it’s okay, you can keep your ultimate geek of the universe card and not ‘talk’ to the panel as if you are sitting down having a one on one conversation with them. Really, social skills are our friends- even Sherlock can fake them 🙂

Anyway- wild rambles, not sure if there was a point, but I had a good time, learned stuff about myself (like I’m an idiot trying to plan a tight schedule with a 2 yr-old) and got myself out of my funk 🙂

How was your weekend? Did you do anything exciting?

I am re-posting this because 1- I have a lot more friends now *waves to you all* and 2- Season Two of Sherlock starts Sunday night on PBS!!!!!! I am so excited.

I LOVE Sherlock Holmes stories from the old Basil Rathbone to the new Robert Downey Jr.- I am also ashamed to admit I’ve never read the books but I do plan to. Anyway the BBC show Sherlock is an modern Sherlock Holmes story. Watson was hurt in Afghanistan, and he’s competent not a bumbling fool- which I like. Sherlock is seriously off, his social skill are very lacking and he’s fully aware of this.

In our modern world those rules don’t exist. Sure there is the polite way to act- but so few people bother with that. So how does someone with social issues function? They become ‘outcasts’ or ‘the odd ones’ they learn and mimic people and accept they aren’t as flexible going from one group to another- Dexter. They work from home, they jump from job to job because they can’t get along with others. Some are geniuses and excused from having to be socially functional- Big Bang Theory.

I work with kids who have been removed from their homes by CPS and a huge part of my job- other then basic hygiene- is social skills. Giving people space, being aware of voice tone, reading body language, and speaking politely. Some kids are young enough or versatile enough that they will learn and fit in well. Some kids are faking it. Some I don’t have the skills to help.

Anyway back to Sherlock. These are all new cases- and his skills have been updated to match modern technology. And the guys are hot- sorry I was trying not to objectify them, but it’s me 🙂 I like hot guys. I want to tell you more- but I don’t want to ruin anything. This really is a unique Sherlock. I enjoyed it so much that I will be watching it over and over again. In fact I just rented it so I can watch Season One before the new one starts Sunday- yes I am that much of a Geek.

Here’s a clip of Sherlock- it’s short but fun- he has a lot of great lines.

And the trailer for Season Two!!!!!