No I have not FINALLY been caught and sentenced to prison. Rude!

I have recently turned forty and been a bit introspective, thinking about the rest of my life.

And now I’m worried that I might only have ten to twenty years left, if I take after my parents. My mom died sixteen days before her fiftieth birthday and my dad died just before Christmas at sixty- one.

After a moment of panic and realizing exactly how little time that is, I kind of calmed down and thought about what I would really like to do if I really only have that little time left.

I only have three big things on my bucket list, having my books published and sell well (yes I have an image of what that looks like specifically), traveling, and spending time with my family.

From wikicommons I want to be here with my family someday.

Of course I am hoping I have a lot longer than ten to twenty years, but I feel more determined to live and fight for what I want now that this ‘time limit’ is looming over me.

What about you, do you have a bucket list? Have you done any of things on your list already?

Philomena stars Dame Judi Dench and Steve Coogan, so yes, you should just go watch it right now :). This movie is based on the true story of a woman, Philomena, who was forced to give up her baby fifty years ago and kept it a secret. But now she wants to find him. Martin, a journalist, helps her as a ‘human interest story’ and to try and save his career, but what he finds is so much more. I don’t want to give anything away, but do have some tissues ready 

They’re innocent until my children get a hold of them.

This is the kind of thing I have to put up with:

Daughter brings me dinner. “Here mom, I have dinner for you.”

“Thanks, honey. It looks good.”

“I’m not so sure about the potatoes. I ate a bite and then threw-up but maybe you’ll have better luck.” Laughing, she walks away. 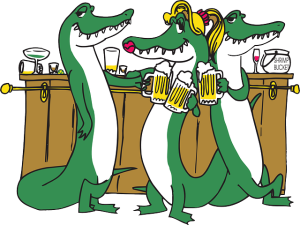 Art by Nemo from Pixabay

I have noticed a new trend that I’m not sure I like, the ‘hero’ of the story being a man whore. Now before we go further I’ll explain that to me the difference between someone sexually active, aggressive, and casual and a ‘man whore or slut’ is respect. Respect for themselves and respect for their partners.

1. The hero does whatever he does with a girl draped all over him and groping him. Usually as this is described, the focus is on the girl, and the hero almost disappears from the text. “She sucked on his ear and ground herself into him.” Notice that he doesn’t move or respond at all? Weird.

2. The heroine refers to the busty blond (jealous much fellow authors) wrapped around the hero as a slut, whore, cheap, easy, skank. Ummm, now I don’t like your heroine. I feel bad for people with such low self-esteem that they treat themselves with such little respect, but calling them a dirty skank, just no.

3. There is a TON of drinking, like eight shots in a night. This might be personal to me, but I can’t relate or connect to this kind of behavior.

Photo by Darinka Maji on Flicker

4. The goody-goody heroine is ‘forced’ by her wild best friend into drinking, wearing a tight sexy outfit she feels uncomfortable in but that the ‘skank’ from earlier would have worn, and going into the bar in the first place.

5. The hero is willing to give up his bacchanalian life for her, to be with her, because no other woman has made him feel like this. Really? You’ve shagged hundreds of ‘bar bunnies,’ and this one woman will change all of that with the touch of her hand?

6. CONDOMS!!! Hello, not only should you be mentioning and having your characters use condoms BUT I’m not touching someone like that until he’s had a Silkwood shower and been tested by a doctor! 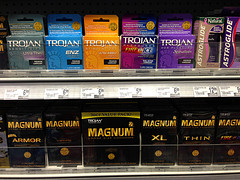 Now so we are clear, I’m not a prude, I’ve had my fun and wild days. But slamming other woman because you’re jealous and want to be draped all over the guy they’re wrapped around, total lack of respect for self and partners, not talking about safe sex, and the heroine being ‘forced’ into things by her best friend, just makes me want to hurl. I can’t connect with the characters, I don’t like them, I don’t find them interesting, and I wouldn’t want to be them.

This was a weird, strange, quirky little movie. If you don’t mind that things just happen and don’t make sense, and if you don’t mind strange sudden dance routines and can let go of reality for a while, then I say check out The Fairy. It’s a French film about a fairy (what else?) who stays at a hotel and offers the night clerk three wishes.

Can you feel the evil?

So the other day I am sitting on the couch with my son minding my own business, when my daughter comes up and says, “Hey mom do you want to see something cool?”

“No.” This is the standard answer, it is always the answer, and always shall be the answer because in fourteen years of life, anything my daughter has shown me after that question has always freaked me out.

She grins, and I wonder for a moment if Satan is her father, then she drops into the splits. Well almost the splits. Her hands smacked the floor and I feared she would break her wrist as she stopped herself from tearing muscles in her legs, you see she can’t yet do the full splits.

I scream and cover my eyes. I don’t want to see my child break anything.

And that is how we made a new word.

Photo by This Particular Greg

It wasn’t until I was in my mid-thirties and working with teens at the group home that I found out some girls/women sleep in their bras.

Uuuumm, why they hell would you do that?

The girls told me it was so they’re breasts wouldn’t sag when they were older.

But bras are uncomfortable. I always assumed that as soon as a woman got home they all changed into comfy clothes and took off their bras. It’s what my mom always did.

But to sleep in a bra to try and keep my boobs from sagging, I don’t think it’s worth it, or honestly would work.
It makes me think of the pictures of women who would wrap their chins and necks in bandages while they slept to prevent the skin from sagging. I doubt that worked either.

These don’t look comfy for sleeping in.

Then I began to wonder (yes, you should be scared) do men wear jock straps to bed to keep their balls from sagging? And how much sag does a man gain over the years of gravity constantly tugging on his delicate bits?

So what about you. Do you wear a bra, or jock strap, or bandages to bed in hopes of defying gravity?